Anecdotes about the GDCh

StartGDChAnniversary 2017Anecdotes about the GDCh

On these pages we publish anecdotes, bizarre or funny things about chemistry and the GDCh. So you will definitely have something to talk about at the next chemists' party or during the coffee break at the upcoming conference.

Adolf von Baeyer, one of the founding fathers, was obviously pleased that the Berlin university had just received a chemical teaching laboratory. "When the disciples of chemistry flock from near and far to the halls of this scientific institute, it is desirable that they are received in a dignified manner by the representatives of science and led to a common work," he called out to the approximately 100 participants of the inaugural meeting.

In any case, we are happy if the disciples will stream to Berlin on the occasion of our anniversary science forum chemistry in September 2017. And in the spirit of Adolf von Bayer, we will endeavor to welcome you in a dignified manner :-)

Paul von Hindenburg and the Association of German Chemists

The predecessors of today's science forums were the general meetings. In May 1929 this took place in Breslau, which at that time belonged to the German Reich. And on the occasion of this general assembly, the then Reich President Paul von Hindenburg personally sent this telegram in which he wished the conference a successful outcome. By the way: if someone would like to wish us something about the upcoming WiFo: Telegram is also possible, but it is easier to reach us via Twitter at @ GDCh-Wifo and # wifo2017.

We take a leap to the GDCh in 1946. Karl Ziegler (1898?1973) was the proud owner of GDCh membership number 1. From 1949 to 1951, Ziegler, the developer of the Ziegler-Natta process for the production of polyolefins, was the first president of the GDCh. We do not publish the membership number of the first President of the GDCh here for data protection reasons, but we already reveal her name: It was Barbara Albert and her term of office ran from 2012 to 2013. Currently (2016 to 2017) Thisbe K. Lindhorst is the incumbent President of the GDCh . As the second woman and 34th in the line of GDCh presidents. Actually there are only 33 presidents, because Heinrich Nöth (1928?2015) had to run twice. From 1988 to 1989 and from 1992 to 1993 he served as President of the GDCh. Photos from left: Karl Ziegler, Barbara Albert (Photo: Katrin Binner), Heinrich Nöth and Thisbe K. Lindhorst

And speaking of membership numbers: here is a short timeline of our membership numbers and how it should be for scientists, let's look at the whole thing logarhythmically: 10 0 Karl Ziegler held 1 as described above. 10 1 When the 10 was awarded can no longer be reconstructed, at least without a dusty archive search. But it was in 1946. 10 2 Also in 1946 the 100 was reached. 10 3 The 1000 was awarded in January 1947. The GDCh had the first 1000 members before it was officially founded in 1949. However, in September 1946 a "German Chemical Society" was founded in the British zone of occupied Germany, and in 1947 a GDCh Hesse and a GDCh North-Württemberg joined them / North Baden in addition. 10 4 It took nine years to assign the four-digit numbers. In January 1956, numbers of 10,000 and higher were issued for the first time. 10 5 The step from the five-digit to the six-digit membership number took place on September 22, 2011. Two students from two places not far from each other are the owners of the two magical numbers 99,999 and 100,000. It is quite possible that the two of them know each other and joined the GDCh together, perhaps at a GDCh event for teachers. At the moment (February 2017) we are assigning the numbers 113,000 and higher. And even if the extrapolation is admittedly not entirely scientifically correct: if chemists join the GDCh the same way, we will reach the million mark in around 2079, i.e. 10 6   crack. This would then coincide with the 212th anniversary of the German Chemical Society or the 130th anniversary of the GDCh!

No, August Wilhelm von Hofmann (1818 to 1892) was of course not an Englishman, he was born in Germany (Giessen). But he lived and worked in London for 20 years. In 1845 he was appointed Head of the newly founded Royal College of Chemistry, which wanted to offer practical training for chemists, and German chemists were very popular at the time. He was also a dedicated member of the Chemical Society of London, a forerunner of the Royal Society of Chemistry, and its president from 1861 to 1863. Not long after his return to Germany in 1865, the German Chemical Society, the predecessor of the GDCh, was founded in Berlin in 1867, with Hofmann as its first president. For this reason, not only we, but also our colleagues from the Royal Society of Chemistry see August Wilhelm von Hofmann as one of their founding fathers. Hofmann was just international and therefore very modern by today's standards. A detailed report on August Wilhelm von Hofmann and his work in London can be found in part 1 of the series "Searching for traces" in the Nachrichten aus der Chemie (Nachr. Chem, 65 (2017) 157. 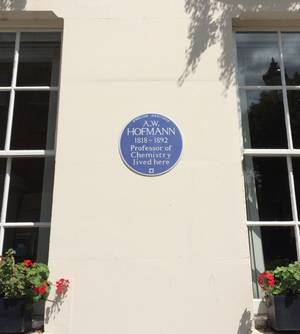 Wilhelm Klemm (1896-1985) was an important chemist and from 1952 to 1953 the second president of the GDCh. He was a professor of Inorganic Chemistry at the University of Münster and a street in Münster is named after him. The GDCh awards the Wilhelm-Klemm-Prize every two years for outstanding services in the field of inorganic chemistry. Wilhelmine Klemm know "Tatort" fans as a chain-smoking public prosecutor from Münster who argues with Inspector Thiel or forensic doctor Boerne in almost every episode. And that Wilhelmine Klemm, as you can read several times on the Internet, is said to have been named after "our" Wilhelm Klemm. After all, Wilhelmine Klemm also works in Münster and the forensic medicine institute, which always plays a major role in the crime scene, is not far from Wilhelm-Klemm-Strasse. But as nice as this story of the name sponsorship is, it is unfortunately wrong (or belongs to the "alternative facts", as they have recently said). As a question at the WDR showed, the identity of the names is pure coincidence. So the author thought of the wife of Federal President Lübke with Wilhelmine and a friend from school with Klemm. And we learn from it that not everything that is on Wikipedia is correct. But we know that as scientists anyway. left: Wilhelm Klemm (1896-1985), GDCh President from 1952-1953
right: "Wilhelmine Klemm" (actress Mechthild Großmann) Image: WDR / Michael Böhme

And one more thing about the crime scene: the actor who embodies the detective Paul Brix in the Frankfurt crime scene is called Wolfram Koch. And the manager of the German Chemical Society, who heads the headquarters in Frankfurt, is - exactly - even Wolfram Koch. The two are not related. And they haven't met personally either. But since new Tatort episodes are regularly filmed in Frankfurt, that can still come. left: Professor Wolfram Koch, chemist
right: Wolfram Koch, actor (Image: HR / Degeto / Bettina Müller)

The colleagues of the GDCh-Zeitschrift Chemkon dug it up: When Jacobus Henricus van't Hoff and Joseph Achille Le Bel first postulated in 1874 that a carbon atom is tetrahedrally framed by its four binding partners, they received biting ridicule. At the time, it was assumed that molecules were flat and planar like a sheet of paper. The chemist Hermann Kolbe cursed publicly about this, in his opinion, nonsensical view: " A Dr. JH van't Hoff, employed at the veterinary school in Utrecht, seems to have no taste for exact chemical research. He considered it more convenient to (...) to announce how the atoms appeared to be stored in space on the chemical Parnassus, which he had climbed by bold flight. "Strong stuff - especially because a few years later it became clear that van't Hoff and Le Bel were right and only the three-dimensional arrangement explains the phenomenon of chirality. Even then, it wasn't that easy to differentiate between truth and fake news. Source: (2017), student task: CHEMKON 1/2017. CHEMKON, 24: 39-40. doi: 10.1002 / ckon.201780171

Justus von Liebig was not only one of the most important chemists of his time, he also tried to keep the big picture in view. An essay by him appeared in the Annalen der Chemie und Pharmacie ("Liebigs Annalen") in 1867, in which he presented the development of chemical sciences from antiquity to the most recent times and formulated hopes for the future: "The history of peoples gives we hear of the impotent efforts of political and ecclesiastical powers to maintain the physical and mental slavery of people; History to come will describe the victories of freedom which men won through the exploration of the reason of things and the truth; Victories with guns to which no blood sticks, and in a struggle in which morality and religion only participated as weak allies. ? As we all know, Liebig's vision of the" guns to which no blood sticks "became in the last 150 years ago, unfortunately, often refuted and this also with the help of chemistry (gunpowder, steel production for weapons etc.) But his thoughts are still relevant today. This episode was taken from a post on the Nachrichten aus der Chemie. The complete article with further highlights and episodes from the founding year of the German Chemical Society, so to speak the trend report 1867, GDCh former president and honorary member Henning Hopf in the Nachrichten aus der Chemie (Nachr. Chem, 65 (2017) 391. Image: Franz Hanfstaengl ( Public Domain) via Wikimedia Commons

But now after all the fake news and visions about science. We all learned the law of conservation of energy during our studies. Of course, this was also known 150 years ago, as the poem by Wilhelm Busch shows: Here the cheek is full of juice,
The hand hangs there, filled with strength.
The strength, as a result of the excitement,
Transforms into swing motion.
Movement that in rapid lightning bolts
Rushes to the cheek, becomes heat here. But the heat, from inflammation
The nerve burns as a pain sensation
To the deepest core of the soul,
And nobody likes that feeling.
This act is called slap,
The researcher calls it transformation of force. Source: Busch, picture stories. Balduin Bählamm, the prevented poet, 1883
Self-portrait by Wilhelm Busch from Wikipedia Commons

It is always exciting to see what can be found in old files and so we jump to 1961, the 94th year after the founding of the German Chemical Society. Women have had the right to vote for 43 years and are of course also fully integrated with chemists. Umm; stop. Not quite, as one can see from a letter dated June 1961. The sender is a chemical investigation office that still exists today. It is about Chemists in Civil Service and among other things it says there: "You have probably read that the city of XY advertised a chemist position some time ago. Only one food chemist and three female food chemists applied. For certain reasons, a male force was wanted, so there was no choice. " Today the author and his investigative office would probably attack all equality officers of the public service at the same time before a shit storm on social media would crash the server. However, as was further explained in the letter, probably only one man applied for the position mentioned because the position was rather low-paid. And the facts that 1. the public service is paid significantly less than in industry and 2. women often (have to) settle for less wages than men, which are still relevant today.

More about the GDCh and its history

back to the anniversary homepage