At the ?Experiment Future?, the GDCh sheds light on scientific, social and political problems and develops proposed solutions in modern workshop formats. In 2019, the event was held for the second time after 2017, following the GDCh Science Forum Chemistry. ?Knowing and not knowing? was the leitmotif that those involved approached in various subject areas. ?Knowledge? is often referred to as the most important resource of the 21st century, but it often does not play the decisive role in the formation of public opinion. Such an attitude can put entire societies in a precarious role and the future in difficult waters. 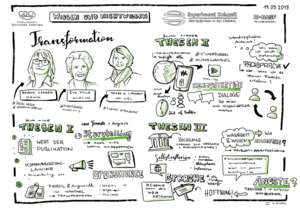 In the first block, Eva Wille, Beatrice Lugger and Thisbe K. Lindhorst shed light on various facets of the ?transformation? of knowledge. Eva Wille, Vice President and Executive Director Chemistry, Wiley-VCH, Weinheim criticized the "communication avalanche" with press releases, social media announcements and publications on preprint servers, which are often accompanied by scientific publications these days. Beatrice Lugger, Scientific Director and Managing Director of the National Institute for Science Communication, Karlsruhe, also stated that communication has changed. Thanks to social media, anyone today can put something into the world, regardless of its truthfulness. Many people are trapped in their filter bubbles and no longer receive neutral information. In order not to create fear or resignation with current issues such as climate change etc. and to strengthen trust in science, she called for new forms of science communication. She also wanted communication with the public to improve the reputation of a scientist and not just scientific publication in specialist journals. Thisbe K. Lindhorst, Otto Diels Institute for Organic Chemistry at the University of Kiel, emphasized that science must also be brought ?to the man or woman?. ?If we don't manage that, science will no longer be heard in politics and society.? She emphasized the importance of a willingness to enter into dialogue with all areas of society and warned that scientists must be able to constantly question themselves and their specialist discipline. In addition, they would have to be able to convert their technical language into understandable language. 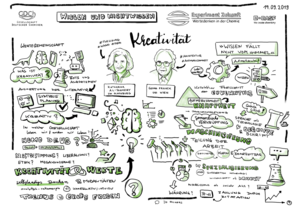 Katharina Al-Shamery, Institute for Chemistry at the University of Oldenburg, talked about how finding new topics has changed in recent years. Cell phones serve to store knowledge and scibots can suggest promising fields of research to scientists and thus influence research directions. In doing so, you promote ?swarm intelligence?, which does not necessarily make the right decisions. Georg Franck, Institute for Architectural Sciences at the Vienna University of Technology, emphasized that "attention" is the central currency of knowledge production, and that the ability to pay attention is increasingly unable to keep pace with the complexity of knowledge. He criticized the fact that scientists "count quotations like other profit". 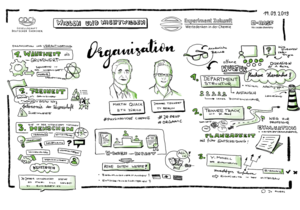 In the ?Organization? block, Johannes F. Teichert, Institute for Chemistry at the TU Berlin, called for flatter hierarchies at universities and a more open culture to mistakes and failures. He also suggested a two-stage evaluation system so that scientists who do not make it to the professorship are kept in the academic mid-level so that they can continue to use their skills. Martin Quack, Laboratory for Physical Chemistry at ETH Zurich, defined freedom of science as a basic value. He criticized the bureaucratic control through rankings and citation indices, which could not indicate the suitability as a scientist. He urged scientists to ?start reading papers instead of rating papers? and emphasized that, as basic values for people who work in science, ?personal integrity and a good heart? are still more important than measurable factors. 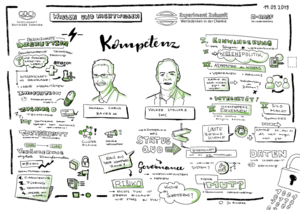 The last block of the morning was about ?competence?. Wolfram Carius, Head of Pharma Product Supply, Bayer AG, Berlin, presented the massive disruptions in the pharmaceutical industry caused by digitization and, increasingly, by artificial intelligence. "Business models change fundamentally and quickly". He warned that Germany could lose touch with the USA and China if it does not succeed in reacting faster and faster to new challenges. He called for the courage to specifically promote excellence instead of distributing funds evenly. ?Science does not play the role it has to play,? he criticized, noting that many politicians do not have specialist knowledge but are constantly getting their say in the media, while science has expertise but is not heard. Volker Stollorz, Managing Director of Science Media Center Germany, Cologne, demanded that modern societies should be immigration societies for new knowledge. He emphasized the inequality of skills in society that had to be dealt with. "It needs excellence to recognize excellence". Citizens who are not scientists must inevitably be able to trust someone who has the knowledge, so personal integrity is an essential point for scientists, as is a commitment to the common good and not to the interests of individual organizations or corporations.

After a lunch break, the participants divided themselves into four workshops in order to work out concrete recommendations for action on the four thematic blocks, which were handed over to GDCh President Matthias Urmann in the final plenary session.

Three demands from the workshops on each topic 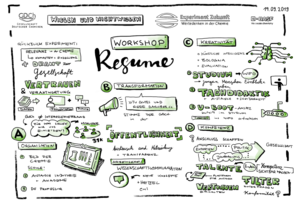 Science is driven by the search for knowledge, but the evaluation of science, the sovereignty of interpretation, has been surrendered by the scientists, was criticized in the final round. Information is disseminated faster today than ever before, but what is so important in science, verification and truth-finding, takes time and should be done with expertise. The role of the GDCh is important because companies find it difficult because they have a credibility problem. The GDCh has the advantage of being neutral and not an interest group, but of promoting the reputation of chemistry across the board. The GDCh can and should therefore provide the experts who evaluate the information after a certain time interval. But it also became clear that the GDCh must continue to work hard to attract its members and young talent so that there is always enough young talent and a breath of fresh air. After all, it is the members who bring the themes of the GDCh into society.

Politics, society and science must work together, the participants in the final round agreed on this. And everyone together must ensure that there is no decoupling between science and society. ?Our responsibility as GDCh is to prepare the data and facts that we have in such a way that others can understand them. We have to better convey our expert knowledge and bring it to society in such a way that it can also be used in society. We can and should do that, ?said GDCh President Matthias Urmann at the end of the event. He continued: ?Trust in science is the basis of everything. You cannot demand trust, you can only ask for it, you have to set an example by being truthful and communicating openly. "

"Knowledge is a drop and ignorance is an ocean", quoted presenter Ines Arland the natural scientist Isaac Newton at the end of the event and Thisbe K. Lindhorst demanded that the GDCh should put its strength and competence at the service of society. She can take responsibility for solving global problems and help lead us into a good future.

2017 - Experiment Future in the Spreespeicher Berlin

The Future Experiment took place for the first time on September 14, 2017 as part of the GDCh Science Forum Chemistry in Spreespeicher Berlin. The framework and starting point formed four thematic blocks, which were formulated as pairs of opposites: "Poor and rich" was discussed on the subject of education and training, in "War and Peace" the question of ethically correct behavior in chemistry was asked, "Life and death" was asked with the subject of pharmaceutical research and ?Sated and Hungry? was about agriculture, world nutrition and sustainability. The keynote speakers were Martin Brudermüller, then Deputy Chairman of the Board of Management and Chief Technology Officer of BASF; Jonathan Forman, Science Policy Adviser for the Organization for the Prohibition of Chemical Weapons, The Hague; Angelika Hilbeck, ETH Zurich; Gisela Lück, Bielefeld University; Edwin Mmutlane, University of Johannesburg; Leonhard Möckl, Stanford University; Stefan Oschmann, CEO of Merck, and Helga Rübsamen-Schaeff, Chairwoman of the Scientific Advisory Board of the pharmaceutical company AiCuris.